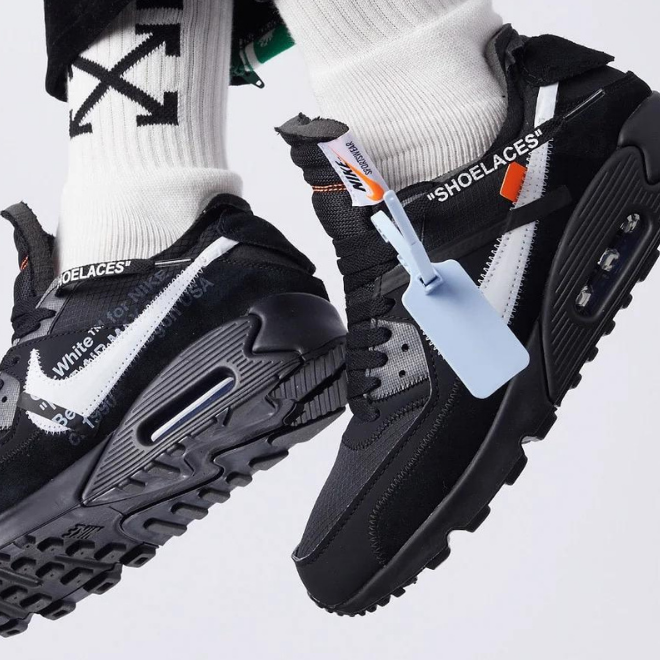 Ox Street has rounded up some of the greatest Air Max sneakers of all time that you should cop now.

One of the most iconic AM90 colorways of all time inspired by America’s favorite breakfast food is the DQM x Air Max 90 ‘Bacon’. This pair was initially made in collaboration with Dave Ortiz and Chris Keefe, the owners of the now-closed butcher-themed NYC sneakers boutique “Dave’s Quality Meat” back in 2004 and rereleased for Air Max Day 2021.

The Air Max 1 OG 'Anniversary' 2017 is a rerelease of the classic 1987 OG University Red colorway on Air Max Day 2017 to honor the well-loved silhouette’s 30th anniversary. They were rereleased in limited quantities in March 2017, but luckily for collectors, there was a restock in October in the same year to give collectors another chance to grab them.

To celebrate the 10-year anniversary of the collaboration between Japanese brand atmos and Nike that resulted in the exclusive and instantly recognizable ‘Elephant’ colorway, they rereleased the iconic OG colorway in the form of the atmos x Air Max 1 ‘Elephant’.

The Air Max 97 OG ‘Metallic Silver’ or also known as ‘Silver bullet’ is known for its late-1990s futuristic look. Released in 2017 as part of the 20th anniversary of the silhouette, there was also a women’s exclusive Swarovski x Wmns Air Max 97 LX 'Silver Bullet' with crystals embedded on the shoes. The ‘Metallic Silver’ is once again slated for a rerelease this year for its 25th anniversary.

Celebrating the 30th anniversary of the Air Max 90 silhouette comes a 2020 reissue of the Nike Air Max 90 ‘Infrared’. An iconic OG colorway of red, white, black, and grey, the sneakers stay true to Tinker Hatfield's original 1990 design in its reconstruction.

Set to release in 2022 this year comes the highly anticipated Travis Scott x Air Max 1 collaborations in several colorways such as ‘Saturn Gold’ and ‘Baroque Brown’. Scott is no stranger to collaborations with Nike, of which all were extremely successful drops and we can’t wait for this one.

Released a year after the collection of Patta x Air Max 1 in celebration of Patta’s 5th anniversary, comes a threeway collab with the Patta x Parra x Air Max 1 ‘Cherrywood’ after months of teasing and rumors of this highly anticipated kicks. Only 258 pairs of these exclusive burgundy kicks were released to the public at a select number of Nike Sportswear retailers in Amsterdam, making them one of the most sought-after pairs of Air Max 1s till today.

Dutch retailer Patta x Air Max 1 collaborations are instantly recognizable with the “Wave” pattern atop the midsole. This special collaboration comes in several colorways released over a period of time in ‘Monarch’, ‘Rush Maroon’, ‘Noise Aqua’, ‘Black’ and ‘Chlorophyll’, delivered with a commemorative shoebox and silver charm bracelet as well.

Designed by Dutch artist Pieter Jansen, aka Parra, is the Para x Air Max 1 ‘Albert Heijn’. One of the two pairs that he designed representing his hometown of Amsterdam, this pair came in Parra’s signature use of bright colors like orange, blue and white that was inspired by Dutch supermarket chain Albert Heijn. But what made this pair ultra-rare and one of the most expensive Air Max 1s in the world was that the supermarket changed their branding shortly before the sneakers were released which made Nike scrap this design with an exception of just 24 pairs gifted exclusively to Parra’s family and friends.

The other pair that was designed in 2005 alongside the Para x Air Max 1 ‘Albert Heijn’ was the Parra x Nike Air Max 1 ‘Amsterdam’. Dressed in Brownstone, Blue Reef, and Dark Oak, this unique color combination just works. But what makes this pair really special is the Amsterdam crest on the heel of the AM1 and how there are only a rumored 200 - 300 pairs in existence.

The CLOT x Air Max 1 ‘Kiss of Death’ 2006 marks one of the earliest collaborations between the Hong Kong brand CLOT and Nike, with a retail price of only $100 back then. It features a bold colorway with a blend of unique materials such as traditional suede, genuine snakeskin, ostrich skin, and a plastic transparent toe box in a deconstructed style. Extremely rare as it was only introduced during an invite-only celebration by CLOT, they have become one of the most desired Air Max 1s such that they even launched a remake in the form of the CLOT x Air Max 1 'Kiss of Death' 2021 with a difference in color of the heel overlay and outsole.

The atmos x Air Max 90 ‘Duck Hunter Camo’ was an atmos exclusive version of the Nike Air Max 90 Premium Camo Pack. Paired with the classic ‘Infrared’ colorway, comes an edgy camouflage print on suede uppers.The colorway was so popular that it inspired a reverse version, the Air Max 90 SP 'Reverse Duck Camo' was dropped in 2020 to celebrate the silhouette’s 30th anniversary.

Inspired by World War II Pursuit (Fighter) Plane dubbed the Curtiss P-40 Warhawk, the Air Max 90 ‘Warhawk’ comes with a design unlike that of any other sneaker especially the teeth that seats along the shoe’s upper and midsole. The paint job features a tiger shark print, a nod to the Flying Tigers, a group of volunteer American pilots who were defending China from Japan before the USA joined WWII.

The Air Max Lunar90 SP ‘Moon Landing’ commemorates the 45th anniversary of Neil Armstrong’s walk on the moon. Featuring moon graphics on its uppers and America’s star and stripe details on the heel, the sneakers were sold out immediately when they were released in 2014.

Nike’s ‘On Air’ initiative invited locals from New York, London, Paris, Seoul, Shanghai and Tokyo to design their own Air Max and 18 finalists were chosen, and the public voted on six winners - one per city. The Air Max 97 'On Air: Shanghai Kaleidoscope’ by Cash Ru was one of the winners, and was inspired by the city’s horizon resulting in a calming mixture of sky blue and white as a symbol for clouds.

Yet another collab between Japanese retailer atmos and Nike, the atmos x Nike Air Max 1 B ‘Viotech’ has been regarded as one of the greatest sneakers of all time. It follows the highly successful AM1 ‘Safari’ but proves itself with a unique mix of earthy tones and “Viotech” purple. A golden mini-Swoosh is a nice touch, as well as its white paneling and surround behind the Swoosh was rarely seen back then making it a refreshing design. Its limited production makes this Air Max of legendary status and a true classic coveted by sneakerheads around the world.

This classic 2002 collaboration is considered one of the most collectible sneakers of all time by fans, picking up from Tinker’s Nike Air Safari Pack back in 1987 where he wanted to combine an athletic shoe with a fashionable safari print. The atmos x Nike Air Max 1 ‘Safari’ was so popular that it garnered a 2016 rerelease with some changes in the toebox and outsole to differentiate the two.

A threeway collaboration between British rap star Dizzee Rascal, British designer Ben Drury and Nike on the Air Max 90 resulted in the Air Max 90 ‘Tongue N’ Cheek’. Its release coincided with that of Dizzee’s upcoming LP ‘Tongue in Cheek’. The pink tongue features the words “tongue” and “cheek” embroidered in the album’s distinctive font. Drury incorporates his own design elements as well with the use of 3M in the form of Dizzee’s figure embossed on the heel as well as stitching on the laces, complete with a translucent Swoosh. The ‘Tongue N’ Cheek’ was only dropped in a limited number of 1948 back in 2009, making them extremely rare as well.

The atmos x Air Max 95 “Animal Pack” is perfect for lovers of animal prints. Dressed in a wild mix of faux tiger, leopard, zebra and pony panels, they are sure to grab anyone’s attention. The 2018 rerelease replaces black subs for ivory to differentiate from its 2006 predecessor.

The classic Nike Air Max 95 “Neon” first debuted in 1995, was inspired by the ribcage as seen clearly in its design with pops of neon green that gives the sneaker its name. Coupled with reflective detailing, its 2020 rerelease stays true to its original 1995 design.

LA-based brand and sneaker store Undefeated teams up with Nike for its 15th year anniversary back in 2017.  Featuring a Gucci-inspired design with green and red wavy side panel stripes, the Undefeated x Nike Air Max 97 also coincides with the silhouette’s 20th anniversary and was launched in two colorways of ‘Black’ and ‘Sail’.﻿

Professional tennis player Serena Williams teamed up with OFF-WHITE and Nike for a powerhouse threeway collaboration resulting in the Serena Williams x OFF-WHITE x Air Max 97 OG 'Queen'. The light pink sneaker features a colorful midsole in an incredible blend of fuschia, purple and gold gradient accents unlike any other sneaker, and was released before Williams’ opening match at the 2018 US Open.

Deon Point and Boston-based Concepts store has come up with their own spin on the Air Max 1, creating the Concepts x Air Max 1 SP ‘Mellow’. This sneaker is part of a three-pack lineup all featuring washed blue denim and other interesting textiles like bandanas and its psychedelic Concepts branded collars. The colorful embroidered Swoosh also stands out compared to other sneaker collaborations, and it comes with a guitar pick hangtag, loose thread embroidery, floral patterns, and a ‘mud’ speckled midsole for sneakerheads to embrace the free-spiritedness found in this pair.

The Air Max has certainly put out many interesting or rare collaborations over the years as well as some rereleases of absolutely legendary classics that one should definitely cop. You might not want to snooze on them as compared to its other cousins, and get yours on Ox Street today.