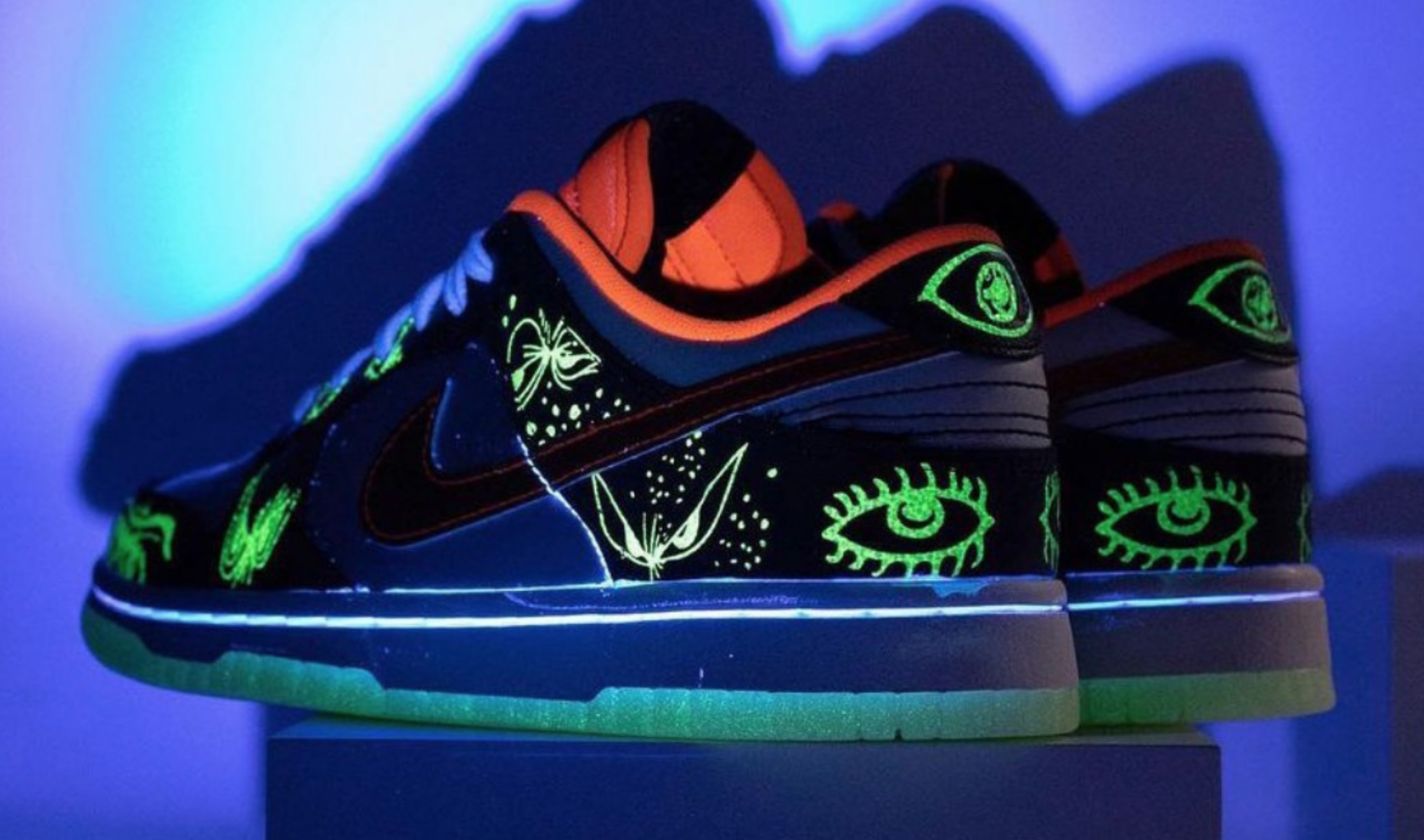 Everyone’s favorite holiday to dress up is almost here as we enter the second half of the year. This year Nike has announced 2 different pairs of Nike SB Dunk Low for the spooky season that are so cool that it's hard to get ghosted on dating apps if you wear these awesome kicks. Here is a closer look on the 2 Halloween Nike Dunks releasing this year, and our top picks for past years’ Halloween favorites.

Everyone’s favorite holiday to dress up is almost here as we enter the second half of the year. This year Nike has announced 2 different pairs of Nike SB Dunk Low for the spooky season that are so cool that it's hard to get ghosted on dating apps if you wear these awesome kicks. Here is a closer look on the 2 Halloween Nike Dunks releasing this year, and our top picks for past years’ Halloween favorites. ‍

For those who prefer something that is festive but also can also be worn all year round, the Nike SB Dunk Low “Mummy” is a great choice. Inspired by a favorite amongst Halloween monsters, the “Mummy” has its uppers tightly wrapped with rough-hewn, light gray fabric that looks like the gauze mummies are wrapped in. The edges of each segment has loose thread and a ripped exposed texture to it, to mimic the roughly torn and cut up bandages.

The suede Swoosh comes in a light blue shade,and the Nike SB branding on the tongue is printed with a dripping green font. The insoles also sport spooky-patterned graphics and finally the glowing green soles round up the look. While the release dates are not out yet, when else other than sometime in October?

Of course when it comes to Halloween what is more fitting than a glow-in-the-dark pair of sneakers to go with your costume? The Nike Dunk Low “Halloween” this year sports a white colored base with black overlays on the mudguards, eyestays, heels, and heel tabs. The black segments featured glow-in-the-dark eye motifs, offering a fun and bold look.

The Swoosh, tongue and collar are in an autumnal pumpkin-inspired Starfish Orange color to match the season. Sail colored midsoles and a glow-in-the-dark green outsole complements the rest of the design. The shoes are expected to release sometime in October at $120 USD.

The Nike Air Force 1 “Skeleton” is one of the top picks for spooky season, having been released in 3 different colorways over 3 years. The shoes first debuted with a white/gray pair in 2018, followed by a black/gray makeup in 2019, and last year with a bold bright orange reminiscent of jack-o’-lanterns.

All of them sport a leather base with a signature detail: an x-ray inspired print of a foot’s bones on both the lateral and medial sides that gives the shoes its name. The same graphics can also be found on the insoles, and a close look at the tongue tab will reveal that Nike spellout is made of small bones as well. While former 2 models sport glow-in-the-dark outsoles, last year’s model has the entire midsole glowing.

For Air Max fans, the Nike Air Max 97 “Halloween Slime” might be something you like. Instead of an obvious monster-inspired or pumpkin-colored theme, this 2020 pair chose to be subtle with glow-in-the-dark slime on black.

The Nike Air Max 97 “Halloween Slime” are dressed in mostly black, with purple suede mudguard running across and glowing green accents on water ripple-inspired overlays with reflective 3M finish for added visibility in low-light conditions - where the translucent rubber outsole glows in the dark. A bright crimson Swoosh stands out on the side.

A crowd favorite for Halloween, The Berrics Canteen dropped the Nike SB Dunk Low “Night of Mischief” that was sold both online and in-store in 2019. Nothing screams “Halloween” like these shoes, sporting purple embroidered Halloween graphics like a spider and spiderweb on black suede uppers. Embroidered in slime green on the heels are the words “Trick” on the left and “Treat” on the right, very season appropriate. The tongue badge has a ghost graphic on the inner side, and the insoles even have a print of pumpkin innards.

The soles also glow-in-the-dark for this pair, and to top it all off a Jack-O’-Lantern face inspired perforation can be found on the orange leather toe box. The exclusive Nike SB Dunk Low “Night of Mischief” was sold on a first-come-first-serve basis on October 29, but to make it more challenging customers had to pull off a kickflip to be allowed to purchase a pair. Remaining pairs were sold to online raffle entrants, making it very rare.

Released in 2018, the Nike Kyrie 4 “Halloween” comes in black, gray and a fierce Rage Green that gives its simplistic base a ghoulish twist. The black takes up the uppers and the midsoles. However, the signature green overlays the front portion of the outsoles and midsoles as if one has stepped on some slime.

Whether it is for the upcoming kicks for the year or ghosts of the past, everyone is definitely excited to dress up and do some trick-or-treating. Start planning your spooky outfits and cop a Halloween-themed pair to complete the look.