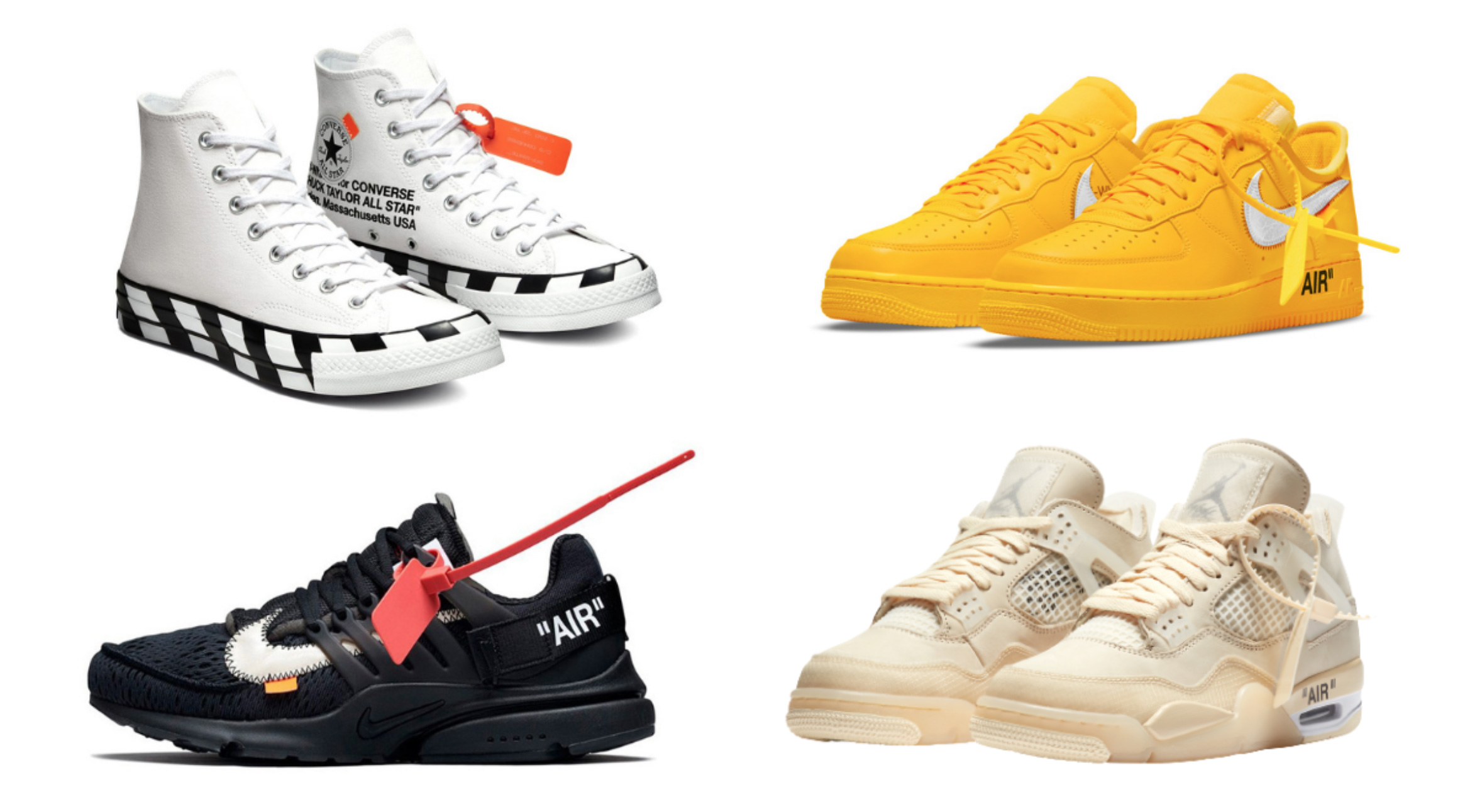 Founded by DJ and fashion designer Virgil Abloh in 2021, OFF-WHITE has become one of the most hyped and popular fashion labels in the world. The brand’s trademark OFF-WHITE design elements includes its text designs in Helvetica font as well as its diagonal black and white striped designs that are instantly recognizable from afar. OFF-WHITE has since made its way well into the sneakers market with many collaborations with brands such as Nike and Converse, and here are our top 6 must-get picks.

Released in December 2019, the OFF-WHITE x Nike Dunk Low ‘University Gold’ is a classic must-have in any OFF-WHITE fan’s closet. Part of a three-piece line up, this edition features a gold and navy blue colorway, with Virgil Abloh’s signature orange flag label on the navy Swoosh. The shoes sport a secondary Flywire lacing in red-orange and tongue tab as well.

The designer’s deconstructed style can be seen in the form of the exposed tongue foam and boldface iconography printed on the medial as well as the ends of the shoelaces. Finally, the midsoles are white with a navy blue outsole.

If you love monochromatic colors and easy to match basics, then the OFF-WHITE x Nike Air Presto ‘Black’ or the ‘White’ are the ones for you. Released in 2018, it was the second time Off-White was working off the Air Presto silhouette with its two-toned predecessor being part of ‘The Ten’ series in 2017.

The 2018 iteration of the Air Presto has an all-black finish with a contrasting white stitched on Swoosh, or entirely in white for the other colorway. Both sport the plastic zip tie, orange tabs on the Swoosh, and lines of text about the shoe’s Beaverton origins on the medial quarter panel. They also feature a heel strap with the word ‘AIR’ printed on it.

All canvas high tops fans look out, you might want to cop a pair of OFF-WHITE x Chuck 70 ‘The Ten’. Its translucent uppers make this pair absolutely stunning and unique, and also includes signature Abloh design elements such as the medial side branding with references to the town Converse was founded in, orange zip tie, and classic orange pull tag on the Converse logo.

The phrases printed on the Chucks include “LEFT” and “RIGHT” on opposite feet, as well as the word “VULCANIZED” on the midsole. The Converse branding on the back of the soles are also upside down. If you like Converse sneakers, besides the OFF-WHITE x Chuck 70 ‘The Ten’ there is also an OFF-WHITE x Chuck 70 ‘White’ that was first released in 2018 and rereleased in 2021 featuring the iconic black and white diagonal stripes.

The release of the OFF-WHITE x Air Max 90 ‘Desert Ore’ was seen as the end of ‘The Ten’ collaboration between the brands towards early 2019. Luckily for fans, it turned out that it was not the end as the brands have continued their collaboration up till today and the sneakers that were released as part of the ‘The Ten’ have become milestones in the history of OFF-WHITE x Nike collaborations.

The ‘Desert Ore’ comes in the retro Air Max 90 silhouette, dressed in a warm tan shade on suede and nubuck uppers, the shoes sport a rugged and adventurous look. The Swoosh comes in Bright Mango orange and looks like it has been sewn on with obvious orange stitches. The shoes are complete with a blue zip tie and printed text as part of Off-White’s branding on the medial side. Besides ‘Desert Ore’, the Off-White x Air Max 90 also comes in a classic ‘Black’ colorway.

This one is for the ladies with the OFF-WHITE x Women’s Air Jordan 4 SP ‘Sail’. The subdued cream colored ‘Sail’ colorway in a classic silhouette makes it a basic that is easy to match with any outfit. This women’s exclusive colorway was immensely popular, and a pair sold at $187,000 USD at auction with proceeds going to the Black Lives Matter movement, Inquest and The Black Curriculum.

Released in limited quantities in July 2020, this AJ4 comes dressed in a monochromatic off-white color, with semi-translucent TPU detailing on the top two and bottom two molded eyelets. The laterals sport structural ‘wings’ and heel panels with the same material. Completing the look are three choices of shoelaces, Abloh’s iconic zip tie that comes in the same shade, and the word ‘AIR’ printed above the Air sole unit.

A new spin on the aforementioned OFF-WHITE x Nike Dunk Low ‘University Gold’ in the form of the Nike Air Force 1 Low, this drop is one that is highly anticipated by fans. A first look was spotted on none other than NBA champion LeBron James during the 2021 NBA All-Star Weekend in March. A detailed look has since been released for this pair of golden kicks.

Abloh has covered the leather uppers entirely in a rich University Gold except a silver Swoosh with black contrasting zigzag stitching, paired with the designer's signature Helvetica text designs on the medial quarter panel.’AIR’ is printed in Helvetica as well on the matching yellow midsoles. Exposed foam construction on the collar and tongue, with a woven tongue tag with Off-White x Nike Air branding with Abloh’s signature zip tie tag completes the look. This pair is expected to drop sometime this month, but an official release date and pricing information has not been released yet at the time of writing.

With OFF-WHITE’s brand still gaining increasing popularity, the time to cop a pair or two of their collaborative sneakers is now or never.