The Spookiest Sneakers Available at Ox Street This Halloween! 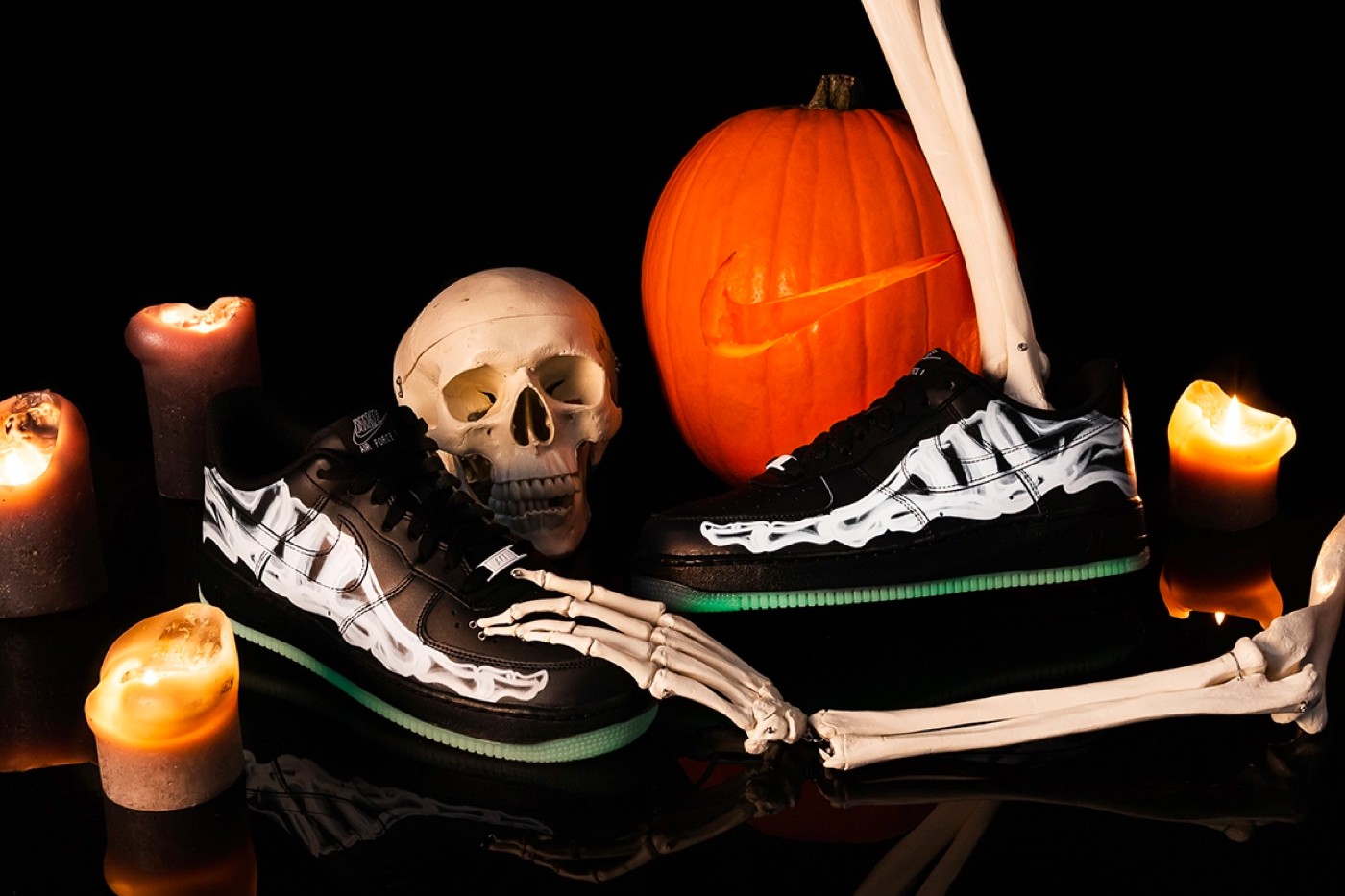 Give your creepy collection a blood-curdling boost this spooky season!

Halloween is literally just around the corner, and what better way is there to celebrate than with some of the spookiest sneakers of all time? Over the past few decades, the sneaker industry been blessed with some of the best killer kicks ever, and it just so happens that many of these are available to buy right now here at Ox Street! From Air Force 1s to Dunks, there's something for absolutely everyone here. So what are you waiting for? Giving your creepy collection the blood-curdling boost that it deserves right now before it's too late!

To kick things off, we have the Nike Air Force 1 '07 QS "Black Skeleton." First released back in 2019, this pair features a creepy all-black leather construction with a X-ray graphic of a foot printed along the lateral side. The lace tips and outsole underneath are all finished in a special coating that makes these glow in a ghoulish green hue as soon as the lights are turned down. A must-have for every Halloween rotation, you might want to secure your size right now while it's still around.

Originally release around the height of the SB Dunk hype back in 2021, the Nike SB Dunk Low "Mummy" clearly pays tribute to the mummies that you might read about in Ancient Egyptian history. Wrapped in a bandage-like canvas throughout, glow-in-the-dark detailing features throughout, while a set of monstrous eyes peek through the heel in red and yellow.

When the Nike Air Max 97 "Halloween Slime" was first teased all the way back in September 2020, we knew straight away that this was a must-have for every spooky sneaker collection. Taking on the Christian Tresser classic, while the top half opts for a classic black mesh and leather construction the bottom half is decorated with purple suede complete with green slime leaking throughout.

Even though the late and great Virgil Abloh isn't with us anymore, his legacy continues to live on through releases like the Off-White x Nike Blazer Mid "Grim Reaper." A pack of sneakers that popped out of nowhere in 2018, just like the Grim Reaper himself, this pair features a black upper with a low-slung Swoosh that resembles a scythe. You'll also find plenty of delightfully deconstructed details throughout,

When the Nike Air Force 1 Low "Shibuya Halloween" was first announced back in 2019, it was revealed to be a Japan exclusive colorway that wasn't going to drop anywhere outside of the country. Luckily, you can secure your pair here at Ox Street. Inspired by Shibuya's world-renowned Halloween traditions, the upper features three different materials including tumbled leather at the front, translucent paneling on the midfoot and toebox, and glossy patent around the heel.

The Nike Air Presto Premium "Halloween" has quite literally got its eye on you. Taking on the 2000s runner, the black neoprene upper is contrasted with thematic orange stitching, while the glow-in-the-dark heel is decorated with a series of scary eyes that stare at you wherever you go. Down below, you'll find a crisp Air midsole that will make it easier to run away from all the goblins and ghouls this Halloween.

Just like the aforementioned Air Presto, this Nike Dunk Low "Halloween" comes from the same creepy collection. While it may look like just another classic colorway from a distance, as soon as the lights are turn down a series of ghoulish green eyes are revealed throughout the leather upper for a look that is sure to turn heads. This is then finished with a pumpkin-inspired orange tongue and Swoosh combination.

And last but not least, we have the Nike Air Force 1 QS "Skeleton." The first colorway to release as part of the annual "Skeleton" collection, this will always be a classic. Taking on the OG "Triple White" AF 1, it's been printed with a X-ray foot along the side panels and infused with glow-in-the-dark aglets and outsole for a squeamish style that will no doubt turn heads this Halloween.