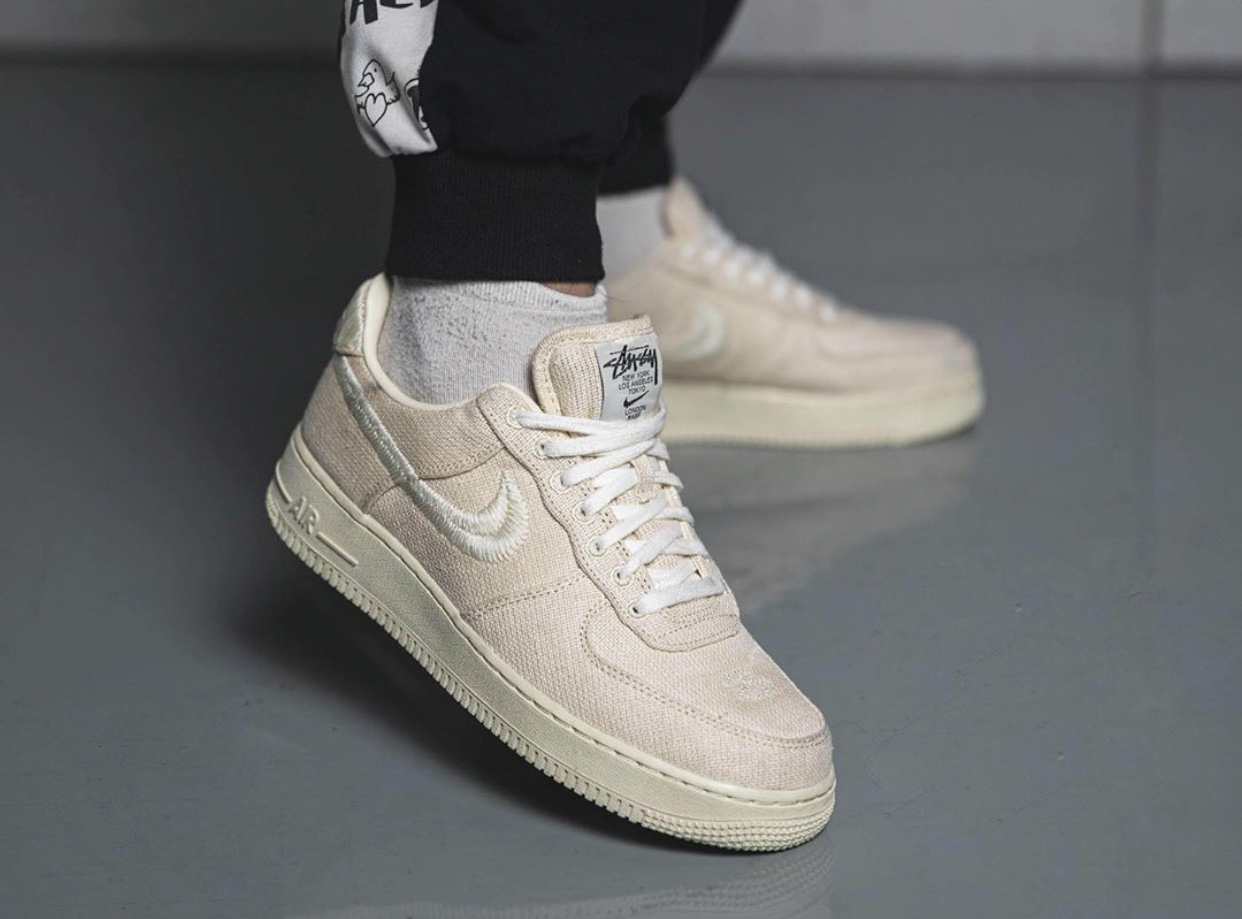 Ox Street introduces Stussy x Nike sneakers like the Spiridon Cage 2, Air Force 1 Low and Mid, and more in this guide and how you can grab them on Ox Street.

Stüssy is one of those brands that is instantly recognisable for its iconic signature-like print on apparel and accessories. Born from the Southern California surf scene in 1984 by Shawn Stussy, it comes as no surprise that the brand has made its way to becoming a staple when it comes to casual streetwear today. One of the oldest and original streetwear brands around, they are also longtime collaborators with Nike on several fire collaborative sneakers that are on many’s to-cop lists. Ox Street introduces them to you in our ultimate Stüssy x Nike guide, and how you can grab them on our platform today.

The Air Huarache is a classic silhouette designed by Tinker Hatfield first released in 1991. Stüssy then decided to work on this silhouette that debuted its collaboration with Nike in 2000. This collab was then scored a limited edition rerelease in 2021 for fans more than two decades later after the first.

The rerelease kept to the original earth-toned colorways of the creamy ‘Desert Oak’ and the more white-based ‘Dark Olive’ with nubuck and textile uppers, the Huarache’s outer cage, elastic heel strap, and a foam sole with polka dot textures and Nike Air cushioning. Rubber Air Huarache emblems are found affixed to the tongues, with a printed insole, and Nike Air branding found on the heel. These limited editioned kicks with a history of kicking off the Stüssy x Nike collab is one you should consider adding to your collection.

The Stüssy x Nike Air Zoom Spiridon Cage 2 was first released with two colorways of the more casual ‘Fossil’ and a sporty-looking ‘Pure Platinum’ in March 2020, with the ‘Black Cool Grey’ dropping two months later due to the success of the first two models. Branding for these kicks comes in the form of oval-shaped Stüssy badges found on the tongues and heels, Stüssy branding printed on the toe, the Swooshes, Air Zoom label on the midsole, and dual branding on the outsoles and insoles. The sneakers are characterized by its lightweight high performance Phylite rubber midsoles with Zoom Air bags, covered with plastic heel cages.

Each offering comes in a different material that sets them apart, so who’s stopping you from copping all three? The ‘Pure Platinum’ comes with a silver mesh upper on top of a black base, complete with silver overlays and laces alongside glossy black accents on the heel, tongue, and Swooshes. ‘Fossil’ comes in textured rough tan canvas material instead, with black Swooshes embroidered on the toe and sewn on at the midfoot. The ‘Black Cool Grey’ is built similar to the ‘Fossil’ with textile as well, but comes completely black except for its grey midsoles.

The laceless hybrid model features a web cage overlay taken from the Air Kukini, paired with a perforated mesh base upper. Branding wise, contrasting Swooshes can be found on the midfoot and Nike branding on the synthetic heel overlay. Stüssy’s markings are found on the tongue and co-branded printed insoles. The collars are decorated with a “Bright Cactus” accent for the ‘Black’ and a “Habanero Red” for the ‘White’ to give an extra pop of colour. The sneakers retain the white Phylite midsole from the original Spiridon Cage 2, with the black caged Zoom Air unit at the heel.

The Stüssy x Air Force 1 Low is one of the most hyped collabs between the two brands as it works with the cult-favorite silhouette Air Force 1 Low. This release follows the successes of the Spiridon Cage 2 and the Spiridon Kukini to really end of the year 2020 with a bang. Nothing goes wrong with its “Black” and “Fossil Stone” colorways, which makes them easy to match with any outfit.

Made of breathable hemp construction instead of the usual leather build found on AF1s, the sneaker is accentuated with tonal stitching and laces to give it a sleek, monochromatic look that lets the textures speak for themselves. Even the midsoles and outsoles are not spared from the tonal treatment, continuing the theme. A split-embroidered Swoosh is found on the sides, paired with Stüssy’s double S logo stitched on top of the toebox. A metallic emblem with Stussy’s insignia  is found on the heel tab, while the dual-branded tongue tag features Stussy’s World Tour iconography. The Stüssy x Air Force 1 Low hit the stores in December 2020 with a retail price of $130 USD.

As part of the Nike Air Force 1’s 40th-anniversary celebrations, Stüssy will be collaborating with Nike on the Air Force 1 Mid which is slated to drop sometime this year. Currently, there are three colorways rumored to be released as part of this collaboration. An official look has been released for the Stüssy x Air Force 1 Mid ‘Black’. The toe boxes, quarters, collars, and tongues are in white premium leather, while the tumbled leather Swooshes, overlays, and ankle straps balance out the overall look in solid black. Stussy’s SS logo arrives perforated on the toe boxes and is also found on the metal emblem attached to the heel.

If the Stüssy x Air Force 1 Mid ‘Fossil’ looks familiar, it is likely because it is so similar to the Low iteration that was released 2 years ago. While it has kept the beige monochromatic colorway and hemp uppers, it now comes with a velcro strap that goes on top of the eyelets with Stüssy embroidered on it.

Stüssy has proven to be capable of working across different types of silhouettes and materials to create different looks and styles when it comes to their collaborations with Nike. From the sporty-looking Spiridon to the casual Air Force 1, they have managed to keep their design element in it while making something completely unique, resulting in sold-out successes each time. You can’t go wrong with an established streetwear brand like Stüssy, cop a pair at Ox Street today.