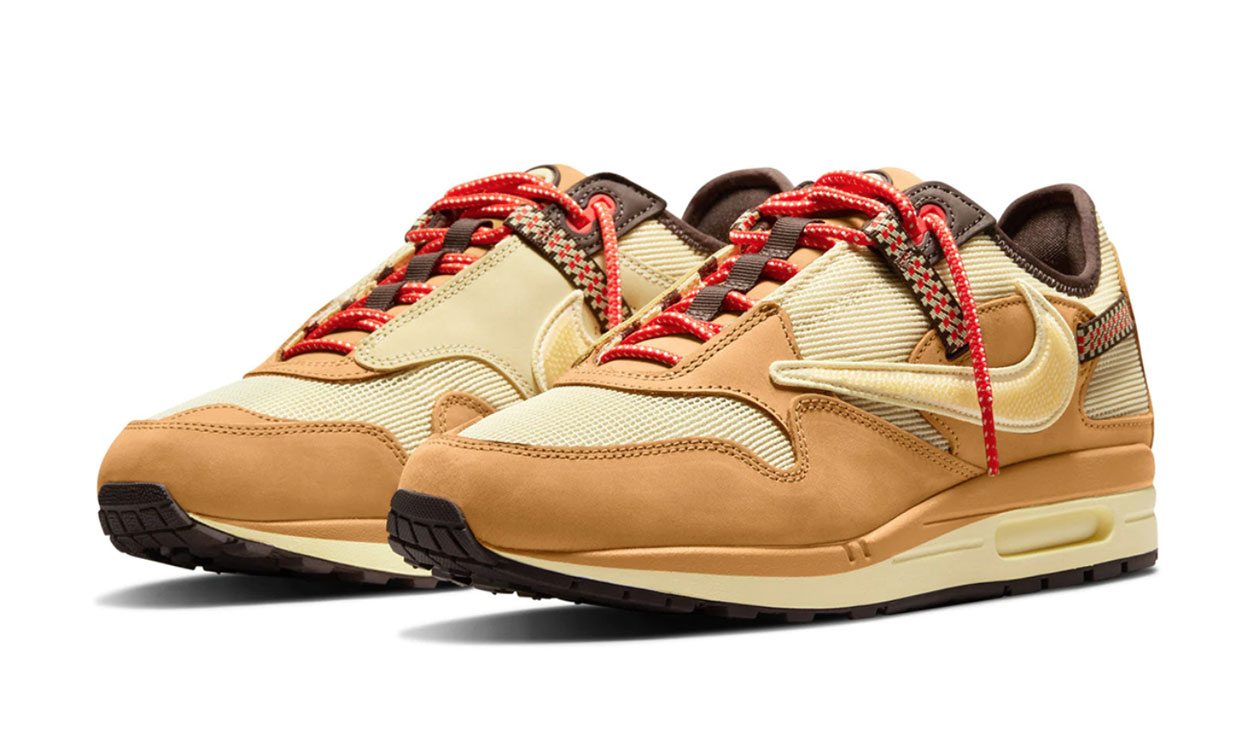 A radical take on the classic Dunk Low silhouette, the Travis Scott x Dunk Low PRM SB QS 'Cactus Jack' is one of the most sought-after sneakers in the market. Its unique blend of materials and prints come together nicely in the brown suede toe box, tartan plaid flannel quarter panel, and tear-away paisley textile that reveals an elephant print underneath on the forefoot and heel overlay. White braided rope laces give a break from all the patterns and textures while adding a rustic look to this very special pair.

Besides being Travis Scott’s first official skate shoe and using premium quality materials, what makes these dunks so expensive and valuable is because they were QS and not available on SNKRS. One could only get their hands on it at select Nike SB stockists - if they were lucky. Released in February 2020 with a retail price of $150 USD, they currently fetch more than 10 times their price for the regular box and add another couple of hundred bucks if you want them in the special box.

This powerhouse threeway collab needs no introduction, as one of the hottest releases of 2021. The Fragment Design x Travis Scott x Air Jordan 1 was available in the High and Low iterations to give fans a variety to choose from. Both are constructed in white premium tumbled leather that gives the shoes a textured look instead of the usual smooth finish.

When Travis Scott worked on everyone’s favorite silhouette, the Air Jordan 1, we knew it was going to be good. The Travis Scott x Air Jordan 1 Retro High OG ‘Mocha’ is a fresh take on a timeless classic model, starting with a bold choice of brown suede on white leather. Unique details like a double-layer construction on the collar, the oversized reverse Swoosh, and the Cactus Jack logo embossed on the heel shows how La Flame has really made this sneaker his own. Released in 2019 with a retail price of $175 USD, they are currently about $1,750 USD if you want to get your hands on a pair.

For fans of low-profile sneakers instead, the Travis Scott x Air Jordan 1 Low 'Mocha' is also a great choice to consider copping. Opting for a darker color palette, it comes with a black-based upper instead to go with the signature dark brown overlays. Not missing out the backward Swoosh in white on the sides, it brings out the yellowed off-white midsoles that give these kicks a weathered look. Finally, red accents found in the branding on the heel and tongue tag add a pop of color. Retailing at $130 USD when it was first released in 2019, these sneakers are currently sold for about $1,720 USD, pretty close to the High’s prices.

The result is a refreshing light brown nubuck base accented by premium white leather overlays. The Swooshes come in a cream shade that really pops from its uppers and matches the midsoles. Scott has opted to keep the scarlet accents on the tongue tags, Cactus Jack insignia and Wings motif at the heel of the shoe. Set to release with a retail price of $150 USD, estimates have already set the resale price to be about $3,100 USD and above.

In celebration of the Air Force 1’s 35th anniversary, the Travis Scott x Air Force 1 'Travis Scott' was released at ComplexCon 2017. Dressed in a crisp white canvas upper with reflective trim, the sneakers also feature a white midsole and a classic gum rubber outsole. Highlights include an upside-down Nike Air branding on the heel and customizable velcro Swoosh and patches.

The Travis Scott x Air Force 1 'Travis Scott' was part of the AF100 pack, which received a wider release in December 2017. As with rare event limited sneakers, its retail price was $150 USD and they currently fetch more than $2,000 USD. A cream-colored sequel to this release named the Travis Scott x Air Force 1 'Sail' was released the following year in 2018 in limited quantities, though they are not worth as much as its predecessor going for a couple of hundreds over $1,000 USD.

The Travis Scott x Air Jordan 4 Retro 'Cactus Jack' pays tribute to Scott’s hometown in Houston. Its University Blue leather uppers and Varsity Red insoles are a nod to the city’s bygone football team Houston Oilers. The sneakers are contrasted with a black lace cage and heel panel with a blue speckled pattern, featuring a red Cactus Jack logo on the left and a Jumpman logo on the right foot. You can’t go wrong when it comes to the Air Jordan 4, with a retail price of $225 USD, they are currently worth about $1,000 USD.

Working on a non-retro silhouette for a change, comes the Travis Scott x Air Max 270 React Eng ‘Cactus Trails’. Nike’s lifestyle runner offers a more athletic design for Scott to work on, with a chunkier build and vintage ‘90s look. In line with its time travel theme, the shoes are treated to rustic tones like a cream textile upper with tonal TPU overlays and a brown nubuck toe for a “back-from-the-future” look. Subtle pops of red, purple, aqua blue, and brown on the collar, tongue, and eyestay, and the look is completed with a rough painted yellow finish on the visible 270 air sole unit. While it might not be the most valuable sneaker on this list compared to the rest, it still goes for a good price retailing at $170 USD when it was released in 2020 and it is currently worth about double at $340 USD.

It is safe to say that anything with Travis Scott’s name and the Cactus Jack logo on it is worth trying to cop, as it is instantly worth at least double its retail value and can go up to 10 times. Want to try your hand at sneaker reselling? Check out our sneaker reselling guide for more information. If you wondering where to check the value of Travis Scott x Nike collabs at any time, especially those in your size, Ox Street is the place to go. You can easily buy directly, make an offer for a price you are willing to pay or list your sneakers for sale.